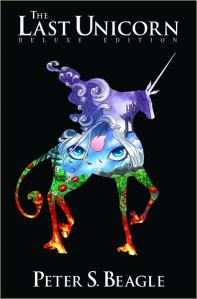 I got this for my birthday. I knew it existed, but it was one of those things that would be too expensive to buy for myself.

The art is beautiful. They couldn’t have picked a better artist for this.

It was interesting to read, having seen the movie, and read the book, and now seeing yet another re-imagining. The artwork is not the same as the movie, and yet, it’s clearly inspired by it – based on it, even. The costumes of the characters – they’re the same, but with more detail. The faces are less cartoony than the movie, and more realistic, but you can do that in a graphic novel, where you only have to draw the face once per shot. But  Schmendrick’s hat has the same two toned fabric, and stitches holding it together, like the movie – all, or most of the details like that, are still there from the movie. But there is license taken – Mommy Fortuna looks quite different, and if you thought she was creepy in the movie, she looks awesome in the graphic novel.

In contrast, the story doesn’t follow the movie exactly. If you’ve read the book and seen the movie, you know the movie skipped both the town the characters were visiting when Jack Jingly found Schmendrick, and Jack giving the password, and Hagsgate town, where Lir’s biological father explains the curse on the town and Haggard’s castle.

Those are brought back into the story in the graphic novel. They didn’t skip anything important, like they did in the movie. They fixed it.

At the end, there’s also a feature of a bunch of art from other artists. It’s quite neat to see renditions of the characters in so many different styles of art. After that is an editor’s note, on the struggles of producing the graphic novel, and how he wanted very much to be as true to the original work as possible. And then there’s a story of Olfert Dapper, the dutch physician to whom the original work was dedicated.

They didn’t screw anything up. Any die hard fan of Peter S. Beagle would love this.