I’m coming up to the end of my flight training; getting those last couple of ratings that will make me employable at a job that I could afford to leave my current job for. And It’s got me looking back at how much this journey has caused me to grow as a person. As I work on my Multi-IFR rating (passed the written today; just the flight test left), I thought I’d do a post to share some of the things flying has taught me.

One of the first was to be patient with myself as I’m learning.

This is my first sewing project: 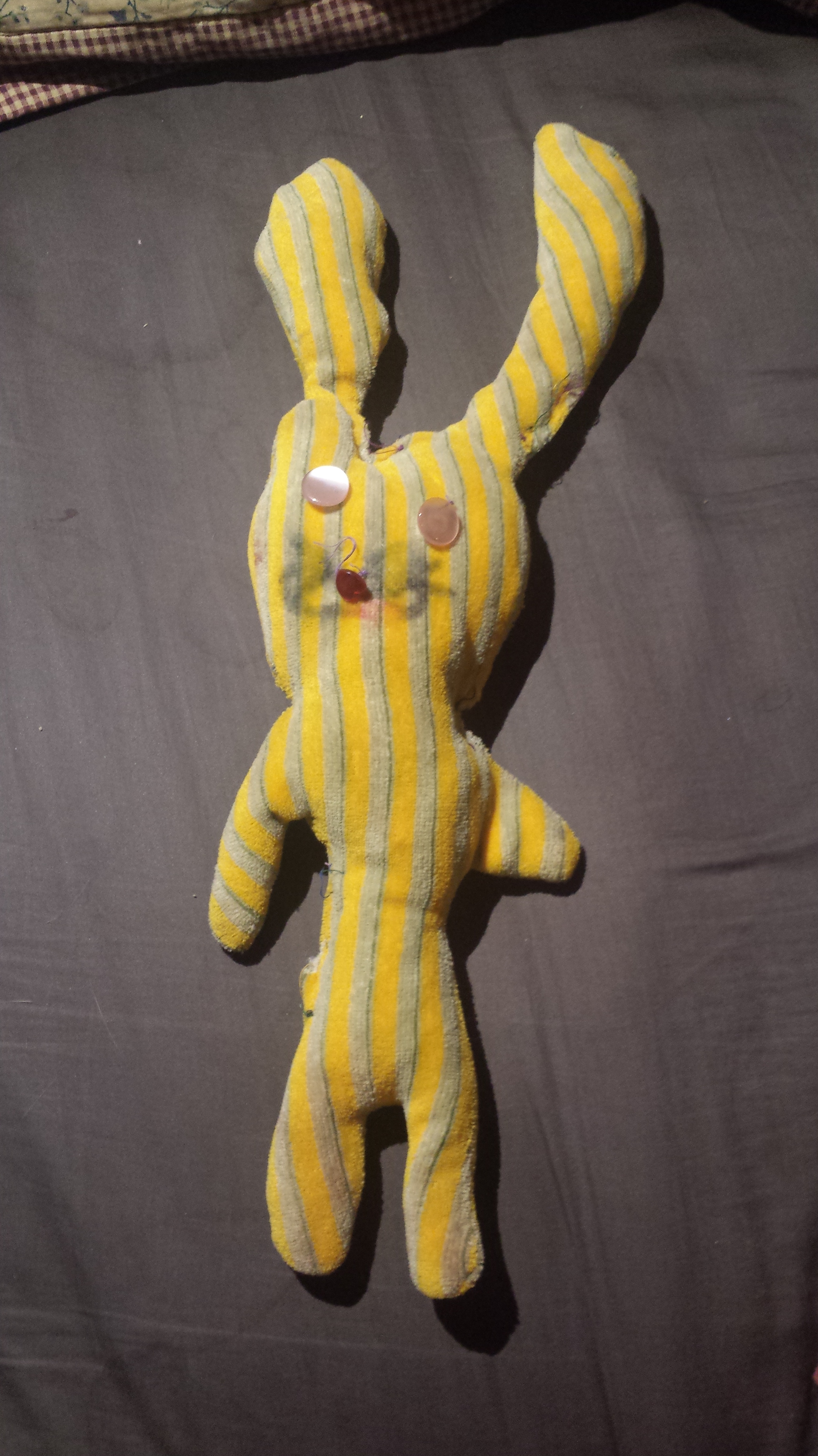 It looks like one of those pictures people post of them trying to replicate some instagrammer’s DIY project and it coming out horribly wrong, I know. I remember being frustrated that the back and the front wouldn’t match up because I didn’t understand if you were going to sew them together with the velvet side out and have them match, you had to cut them out with the velvet sides together, not both layers with the velvet facing up. Mainly because I was five. (ETA – Mother has advised I was actually three.)

I can’t begin to imagine what my mom was thinking as I went about my business, but I bet I was adorable. She was working on something else – she’s quite the seamstress – and she showed me how to cut it out so the back and front matched. She might have even let me use the sewing machine to sew around the edges myself – I can’t remember.

It’s very unevenly stuffed. At least one leg or arm is stuffed at the end with thread, because that was the closest thing at hand to stuff it with. When the scraps of thread on the floor ran out, I started cutting lengths of thread off a spool until my mom suggested stuffing it with scraps of leftover fabric. My mom’s a freaking genius, I’m telling you. She taught me how to read a pattern even before I got to home economics in junior high. I started making three dimensional stuffed animals, and getting a feel for how adjustments to the pattern would affect the toy once it was stuffed, to make the animal less ridiculously proportioned.

As I got older though, I got to be that talented one who catches onto things quickly. Drawing, painting, playing guitar, all those things I picked up and was just good at them without a lot of effort. I forgot how to work at something, and then when I ran into something I wasn’t instantly good at, I learned to just not bother.

And I wasn’t instantly good at flying. I wasn’t a prodigy or anything. And there were definitely points when I felt like I wasn’t getting it, wasn’t progressing. Learning to land was a big one. And the instructors all just said, keep practicing, it’ll come.

I knew they knew better than I did how people learn to fly, so I kept at it, and it eventually did come. It was just a very new experience for me. It sounds ridiculous that working hard and practicing to get good at something was a new thing for me, but really, most things I can go okay, show me what to do, and then just do what I’m shown, with not more than a couple tries before I get it. I never learned to be patient with myself this way, and give myself time to learn, and to not give up after a couple of tries.

I think I started to get back in touch with that five year old that was buried, who happily stumbled though mistakes as she learned, adding tools to her toolbox of knowledge about sewing.

My Grandma Batke kept that bunny all these years though, and she gave it back to me at my wedding. This is the dress I wore:

That’s right, I sewed my own wedding dress. And I see people attempting things all around me, and being frustrated when it doesn’t come out right – their cake falls flat, or they draw something and it’s not art gallery quality, their knitting project has uneven stitches, they build something and the boards aren’t perfectly even. They get frustrated and conclude they’re no good at it. Well obviously not, it’s only the first time you’ve tried. Or even the second or third.

Because I also see, when someone decides they’re going to learn something, and starts earnestly practicing, the people around them watch in awe when they start to see that person getting better. Peter S. Beagle wrote in The Last Unicorn “Perseverance is nine tenths of any art.”

He added onto that “Not that it helps to be nine-tenths an artist, of course.”, but I personally think to a certain extent that last tenth might just be made up of having a brain and opposable thumbs.

In any case, I know there are a lot of people out there who have forgotten how to learn, and they’re not even old enough to use the old-dog-new-tricks excuse. Maybe it has something to do with the culture of instant gratification we live in today. Good isn’t instant though. You have to work at it.