My instructor changed his mind about starting me on the multi-engine aeroplane next week. Instead, we hopped in last Wednesday, and I’ve had a couple flights now.

The plane they train on is a Piper Seminole, which is a nice plane, fairly easy to handle.

The first thing you notice taking off is the power. Bigger engines, more power on each one. The idea is not only to have more power with the two engines, but also to have engines powerful enough that if one fails, the one still running can still keep the plane in the air.

The second thing you notice is what everybody kept telling me I’d notice when I got to the Seminole. It’s about fifty percent faster than the Cessnas I trained on. It cruises at the speeds I’m used to avoiding exceeding, and at twenty five hundred feet, the speed increase is noticeable. In a Cessna, cruising at ninety knots, if feels like you’re crawling across the sky, but in the Seminole, it feels like you’re actually going somewhere.

It’s also a much heavier plane than the Cessnas, and glides like a rock. Maybe not quite as bad as the float plane, but close. Steep turns are a breeze – it doesn’t get bounced around as much in the wind because it’s heavier. The other thing though, is when you add power,  or nose down it takes a bit longer for the plane to respond, so when you’re doing anything at a slow speed, you have to be extra careful of getting close to a stall.

It’s my first time flying a low-wing – for the uninitiated, that’s a plane with the wings attached at the bottom of the fuselage instead of having the fuselage hanging below the wings. That means you can’t use gravity to feed fuel into the engine, so you have fuel pumps, which is yet another among a million things that you have to remember to turn on and off and test.

So many firsts; it’s also my first time flying with retractable landing gear. I’m told landing gear up is bad. You know how you can tell if you’ve landed gear up? It takes full power to taxi to the ramp.* But in all seriousness, it’s an easy thing to forget, and a really bad one if you do!

Overall, it’s helped a lot that we’ve been going over multi-engine stuff in the simulator, so not all of it is completely new, and it hasn’t been too overwhelming. And it has been super nice to get back in the air and behind the controls after having not flown since finishing my float rating in November.

*Can’t believe my instructor hadn’t heard that one.

I’m kind of posting this for the benefit of other student pilots who might read it because it’s an observation of the learning process and what’s normal, and that you can have bad days, and just push past them to succeed.

I’ve had good days and bad days since my Grandma died. One of those bad days was my first lesson back in the Redbird. Part of it was being out of practice, having cancelled one lesson, then the next lesson back was in the other sim, doing a multi-engine intro, since the Redbird was booked. Part of it was stress and being exhausted from work, and part of it might have even been me starting to come down with something. But I did really terrible, no improvement, and regression in some areas.

Sometimes I feel like I’m just a complete failure. But today I was thinking, you know, if I knew someone who was dealing with all the shit I’m dealing with right now, I would wonder how she managed to get as far as she had with flight training, knowing how much dedication flight training requires to get where I am. I need to give myself a break sometimes.

Last week I had a conversation with my manager that was overdue, the result of which was my hours being reduced to part time, to give me time to cope, time for myself, and most importantly, time to fly.

The next lesson in the Redbird I was back on the horse, and the one after definitely steady improvement again.

And then there was last Thursday. I ended the lesson and began the de-breifing frustrated and disgusted with myself, feeling like I’d done awful like that other day.

But then I realized something as I recounted all the things I’d got wrong or missed. It was the first time that list was short enough to start to zero in on what I needed to work on. The first point – in my IFR training at least – where I wasn’t just happy I was doing more things right.

I remember now, hitting this point in learning circuits, where things suddenly didn’t seem quite so overwhelming, and that was that tipping point where things  it wasn’t long after that I was ready to solo. My IFR instructor agreed, and even said, if all goes well, maybe after next week, we’ll be hopping in the real plane to work on the next step.

I’m really grateful that all my instructors have been really positive and encouraging, while still demanding everything I can give them.

There’s one of the guys at work that started a Tie Tuesday thing. He said he was tired of being asked what the hell are you dressed up for when he’d wear one for an interview, so he wanted to normalize it, and started wearing a tie every Tuesday.

I decided being a woman was no reason for me to be left out of Tie Tuesday. After all, there’s lots of jobs – some of them in aviation to boot – where I might, as a woman be required to wear a uniform that included a tie, and thus, technically, neckties have become gender neutral to an extent.

To an extent. When I decided to raid the closet for one of my husband’s ties that matched the collared shirt I was wearing, and head to work, I didn’t think it was going to be as big a deal as it was. 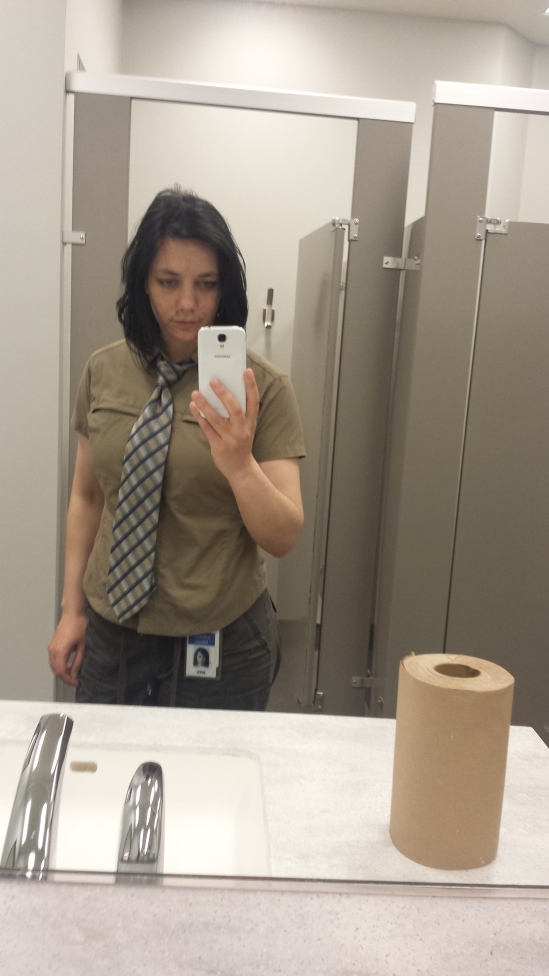 First, the husband wouldn’t give me a kiss goodbye. He might take some time to get used to it.

At work, it was a hit. The vast majority of people smiled and said it was awesome. I was some kind of spectacle; I might as well have been dressed up as Deadpool. And yet, it didn’t look ridiculous, there was nothing inappropriate about it, and everyone was intelligent enough to realize it wasn’t technically a social transgression.

One interesting observation was the odd one who made a point of pretending not to notice. They would look, and I could tell they noticed, and there was a split second of confusion as they tried to figure out how they were supposed to react before they decided the safest response was no response. I imagine because they weren’t sure if it was some kind of trans thing, and it was a workplace that’s very openly supportive of LGBT rights, and no one wants to come off as intolerant. One of those was the project manager as we washed out hands in the ladies room. I diffused  the awkwardness by explaining it was Tie Tuesday, and that one of the guys had started it, and I decided there was no reason I shouldn’t participate. She smiled and said it was awesome, and that it should totally be a thing.

Now my trans friend is going to send me all her old ties she doesn’t plan on wearing anymore!

In conclusion – it was fun, and I think it was a good look on me. There seems to be a lot less pushback to women adopting masculine things than there is to men adopting feminine things, and that’s simply because the feminine is (wrongly) devalued and scorned, and people don’t understand why men would want to be that. In contrast they can completely understand why women would want to become more masculine – masculine is seen as positive. I’m at a point where I’m becoming comfortable thinking of myself as gender-fluid, in the sense that I don’t conform to societal gender norms, though I don’t feel uncomfortable in my own skin. I still like to do the feminine thing sometimes, and mix and match the feminine things with the masculine as I please where it comes to makeup and clothes and interests. I go all out with makeup when I feel like it, but mostly don’t wear any at all most days. I pair feminine tops with cargo pants. I sew and garden, and I fly aeroplanes. If that makes me gender-fluid, then okay. Maybe someday we’ll live in a world where what I am is just normal and doesn’t need a label.

PS: I have advised the co-worker who started Tie Tuesday that this weekend I’m kicking off Skirt Saturday.